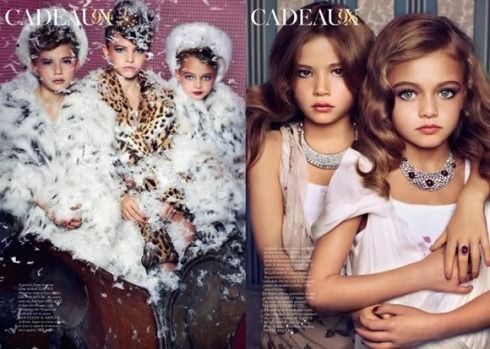 In the periphery of our vision children are coming to be seen and consequently accepted as sexual beings. Our environment is being slowly altered to facilitate that change and what older generations find offensive, the younger generations will have grown up surrounded by and take for granted. To say this is a grand conspiracy would be to jump the gun, but the fact remains that there are influential people who welcome these changes.

“Love Has No Labels” is a campaign by the Ad Council promoting the diverse forms of love and end bias.

My journey to writing this started when I shared the above picture from the “Love Has No Labels” campaign on Facebook asking “what the f*ck?” which I got backlash for when I suggested that this is sexualising the 5-or-so year olds depicted basically in pajamawear. The statement on the image “Love Has No Race” highlights how strange this image is as both girls are clearly of the same race – they’re Europeans. Given that many people, some powerful and influential, are promoting love between children and adults (the wrong sort of love), it’s plainly obvious to me that this image may very well be promoting that agenda. You could say “Well why doesn’t the image show a girl with a grown man?” My answer is, gradualism. Such a depiction would shock and enrage people – we’re not “ready” to see that. Why I have to argue that this image is even just a little bit inappropriate is beyond my comprehension. What looks innocent and sweet to us could possibly look inviting to a particular kind of pervert.

I went looking for examples of this sexualisations of children with a simple Google search and decided I’d be better off compiling the examples in an article instead of casting my pearls (effort and conviction) before swine – no offense Facebook Friends, but you’re missing context and wouldn’t benefit from it.

I’ve gotten tired of searching, researching, and looking at this blasted things. I’ll add more later. If you know of any sinister ad copy out there, pass it along in comments or through our Contact Page.

Notice how the most egregious incidences are clustered around 2011 to 2015. What was going on for those 5-6 years?

This company had a few particularly sinister ad campaigns over the years, which drew ire. Notice particularly in this first set of images how the girls are either in a submissive position (the girl on the bottom right is actually in the position a woman takes to increase likelihood of conception after sex) or has something in or near her mouth.

Many of these girls are under 18, and these ones are particularly crude.

This looks…. positively “rapey.” This picture is cut off at the bottom because she’s clearly underage and what’s down there is pretty damn illegal, I’m sure.

How old do you reckon she is? She looks of-age, but I thought I’d throw this in for good measure.

2014 – “The Sexualisation of Schoolgirls”

Notice on the right-hand image she has the bottle between her legs – a bottle with a flower on top. Potent symbolism. On the left they have her in a supine, almost necrotic, pose.

Why does a men’s clothing company need a young girl in their ad copy? They don’t, because they’re selling men’s clothing. Notice again, the gagging of the mouth. Also notice on her shoulder is a bar code tattoo reading “slave.”

A statement from Roger David:

“The union jack badge and the heart shape are references to the fact that “New Love Club” is a United Kingdom menswear clothing company. New Love Club uses a heart as one of its motifs. The woman used in the campaign was 18 years of age at the time that the photograph of her was shot.”

The toys and products we grow up with are part of our environment and thus inform our reality. You’d be amazed how many of them are sexually suggestive.

Dora the Explorer Aquapet – circa 2006

In case you don’t understand what these are, they’re plastic cup/flask things. The child sucks on the protruding piece of plastic that unmistakably looks like a penis.

“Interesting” place to have the air plug.

This toy was particularly popular… in some sex shops.

This looks to be a 90’s toy, going by the quality of the colour and the style of Batman being unmistakably Adam West.

The Punisher Shape Shifter (on or before 2009)

A giant phallic gun that shoots ooze when a kid pumps it. If you don’t understand how demented this toy is, I suggest watching the commercial below and then the AV Club’s parody of the marketing meeting.

A fixture for the back of a door or a wall with a penis as the hook.

The commercial for this looks like the 90s. It’s a sugar lollypop that shoots ooze out of the middle when children suck it. Look at this commercial. The “Mad Scientist” character hands them to the kids, appears to be in some kind of ecstatic state, and between 4 and 5 seconds a red mist shoots out of one of them as the kids approach. Oh yeah, and it’s looks like a f***ing penis!

This toy can’t be confirmed to be sold anywhere, but I’d like to quote another blog below.

But either way, are we really so surprised? The scene in 2004’s Mean Girls when high-school queen bee Regina’s little sister pumped her tiny grade-school booty to Kelis’s salacious hit “Milkshake” was meant to be satirical; these days, it feels increasingly real.

From Miley Cyrus’s infamous pole-assisted gyrations at the recent Teen Choice Awards to club-ready clothing lines for grade-schoolers like Beyonce’s Dereon Girls, it seems that pop culture is constantly fighting to shorten or even obliterate an ever-briefer age of innocence.

ew.com – A pole-dancing doll for kids? Well done, toy manufacturers of the world!

If you ever wanted to know whether television and popular culture informs the reality of children, this trash was peddled to them from 2001. Now look how many of them dress almost 18 years later.

Beauty Pageants for little girls had been criticized for years for their blatant sexualisations of children – mainly by their own parents. So what did they do? They made it into a television sensation. All of these girls are real, by the way. Not dolls.

I put quotes around Kids’ because these aren’t for children, and to be fair only the scum of the Earth for parents would be these things for their little girls.

This is an abomination. In case you’re still ignorant of this aspect of Human relationships, it’s general knowledge that a woman simply has to spread her legs to get her way in life. Why should a little girl even have to consider that?

A padded bra for girls around 7 years old.

I don’t know what the f**k this is, but it’s disgusting.

Who needs brains when you have these

Have what, exactly? You’re TEN!

Do I make you look fat?

Not overtly sexual in of itself, but introducing young girls to sexual competition with other women… come on.

At some point after the turn of the century it suddenly became okay to have young girls “model” skimpy clothing. The thing is, there’s so much more underage “modeling” going on than there is underage models being used to sell clothes. The reason for this is simple – perverts. Otherwise known as paedophiles. Apparently, none of our governments have outright banned children “modeling” skimpy clothing and bathing suits – but in a “too little, too late, assholes” move, Vogue and other fashion giants have pledged not to use “size zero or underage models” anymore in 2017. I’d say the damage is done as certain deranged or hopelessly f*cking stupid parents out there still sell their children as “models” to “photographers”, and under that guise parents unwittingly loan their children to “photographers” who have their children pose in disgusting and illegal ways, leaving them alone with these creeps to be groomed. I remember reading such an account online from a mother and am having trouble digging it back up.