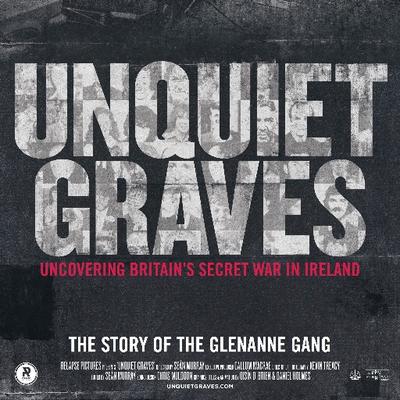 A review and information on “Unquiet Graves”, a documentary by Seán A. Murray, which I attended the screening of today in Galway. The production involved an Irish and English crew and tells the story of collusion between the British military, police, and MI6 with Loyalist paramilitaries, with a particular focus on “The Glennane Gang” responsible for the slaughter of 120 innocent Irish Catholics in the 1970s.

Visit the documentary’s website at unquietgraves.com Like their Page on Facebook and follow them on Twitter @glennanefilm. The more people who show support for and interest in this documentary the more likely it will be distributed. So let them know by using the #UnquietGraves hashtag on social media.

As an immediate descendant of “The Troubles” in Northern Ireland I was struck deeply by this 75 minute recounting of the slaughter of innocents overseen by British military and intelligence and ignored by the RUC (the supposed neutral police force of the time). Even though the documentary ended with a somewhat optimistic tone as it caught up with the current trials and investigations into the events, I still left rather angry and depressed. If it weren’t for the current legal battles to unveil these historic crimes I’d have been inconsolable.

When interviewed after the viewing, creator and director Seán A. Murray said something to the effect of, reading about the collusion, secrecy, and brutal murders (such as in Anne Cadwallader’s book Lethal Allies: British Collusion in Ireland) doesn’t hit you quiet like seeing it encapsulated on the big screen in front of you. He’s absolutely correct. Without sacrificing any journalistic rigor, the documentary was a psychedelic experience incorporating well-crafted recreations and a heart-felt animation at the end to articulate a poetic eulogy for one of the murdered. The production was roughly 70% original footage, 30% historic footage of County Armagh, and interviews with people from both sides of the divide.

As a curious and angering historical note, the forces trained and supplied by the British military were responsible for murdering the Irish showband “The Miami Showband” who wrote and performed the song “To Whom it Concerns” – a tune used for Ireland’s flagship (and world’s oldest) television talkshow “The Late Late Show”.

Check out the documentary’s social media, because you have to see this for yourself. I’ll be sure to inform EVRadio listeners and readers when it’s on sale.

You can now buy/watch Unquiet Graves on Vimeo for €4. I highly recommend Vimeo as you support the artist. It’s also available on Amazon Prime.